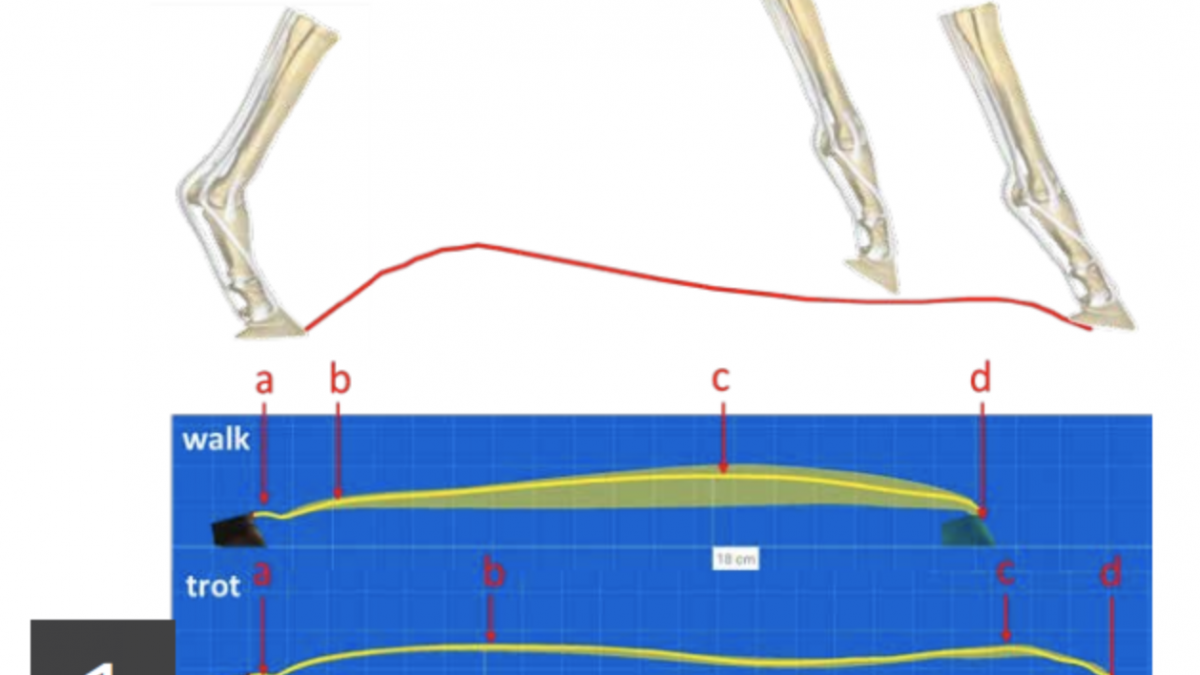 Many farriers have learned or are still learning that the flight arc is influenced by the shape of the hoof or; more precisely, by how steep or flat the slope of the toe wall is . Most of us know the drawings (Fig. 2) showing a hoof with an almost clubfoot-like shape associated with some horses from the Iberian Peninsula. The other drawing typically shows a flat-angled Thoroughbred kind of hoof. Typically, the first-mentioned drawing shows a flight arc that is very high, especially at the end of the swing phase, whereas the second one shows a lower flight arc that makes for a longer stride. Modern research paints a more specific picture here, one that doesn`t see the dorsal wall angle as the main factor influencing the flight arc. Recently Werkman has developed a new device, called BLACK®, that opens up more possibilities to analyse different aspects of the horses’ motion pattern. It is the first sensor-based measuring device designed to be used by farriers during their daily work. Due to the number of different parameters that it can measure, it is used to help see changes through trimming and shoeing directly “in the field” (during shoeing) and is applied in parallel by research groups to collect data. This article on the flight arc is the first of a series that explains the current state of research into the different parameters of motion. It will be interesting to see if future measurements with the BLACK® confirm or challenge these findings.

Definition: The flight arc describes how the foot moves through the air during the swing phase when seen from the side. After the hoof leaves the ground, the limb swings forward until maximal extension, followed by backwards movement of the limb before ground contact to reduce the velocity of hoof movement and stress upon landing.[1] The flight arc describes a curve with two peaks.[2] It reaches its highest point shortly after lift-off, after which the toe follows a low flight path.[3] (Fig 1) The motion of the hoof during the swing phase is the result of all joint movements in the limb. This explains the high impact of body and limb conformation on the shape of the flight arc. Asymmetries in articular surfaces or limb deformities influence the height, straightness, and timing of the hoof’s motion during the swing phase. 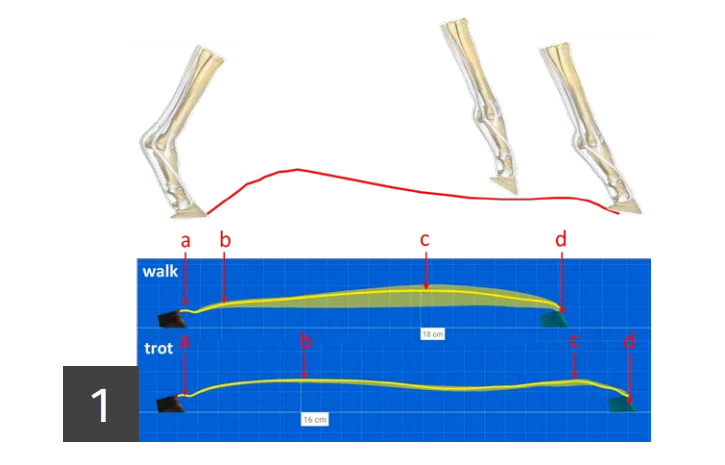 The Werkman BLACK® shows the averaged flight arc of all recorded strides as a highlighted (yellow) line.(Fig 1) The variations between all recorded strides are represented as the (yellow) shadow. Shortly before breaking over the hoof rotates forward (a), before lifting off and increasing the height of the flight arc (b). The hoof subsequently reaches its maximum height for the ongoing swing phase (c). The curve falls to zero shortly before landing (d).

2. Relevance of FLIGHT ARC: How the hoof impacts the ground and is loaded depends directly on the forward movement of the limb during the swing phase[1]. The forward motion of the limb is enabled by the muscles of the upper limb, whereas the lower limb follows passively[1]. Evaluating the flight arc pattern is of relevance either as part of lameness examination or to assess quality of gait in different athletic disciplines. Lameness examination: pain, muscular dysfunction (tension, muscle over- or underdevelopment) or neurological disorders (paralysis) related to the upper limb, neck, back, or pelvis might cause asymmetry of the flight arc during the swing phase. Athletic disciplines: In some disciplines, high forelimb action presented in a high flight arc is currently rewarded with high scores in competitions. In addition, flight arc symmetry is demanded as a sign of optimal limb coordination and movement stability.[4] Hence, the flight arc is a parameter of interest in disciplines such as dressage, gaited horse shows, and trotting races.

5. What does not influence the flight arc? • A change in hoof angulation caused by different trimming methods shows no influence on the flight arc of the toe between feet with normal and acute/ flat hoof angles.[3]

6. Effects of changes in flight arc: The change in the height of the flight arc that is caused by by additional weight correlates with the amount of flexion or extension in the carpus or fetlock joint.[12] An increase in the height of the flight arc leads to more flexion in the carpus, stifle, tarsal, and fetlock joints[14] during the swing phase. Furthermore, studies have revealed an increase in hoof velocity during forward movement in the swing phase. As a result, the hoof has to withstand higher braking forces during initial ground contact.[4] The following discipline-specific effects on gait quality could be shown; an improvement in the cleanness of the four-beat footfall rhythm of the toelt [4,5]; shoeing likewise improves the trot quality of sound Dutch Warmblood horses as a result of the increased inertia of the lower limb in the swing phase [9]

This website uses cookies to improve your experience while you navigate through the website. Out of these cookies, the cookies that are categorized as necessary are stored on your browser as they are essential for the working of basic functionalities of the website. We also use third-party cookies that help us analyze and understand how you use this website. These cookies will be stored in your browser only with your consent. You also have the option to opt-out of these cookies. But opting out of some of these cookies may have an effect on your browsing experience.
Necessary Always Enabled
Necessary cookies are absolutely essential for the website to function properly. This category only includes cookies that ensures basic functionalities and security features of the website. These cookies do not store any personal information.
Non-necessary
Any cookies that may not be particularly necessary for the website to function and is used specifically to collect user personal data via analytics, ads, other embedded contents are termed as non-necessary cookies. It is mandatory to procure user consent prior to running these cookies on your website.
SAVE & ACCEPT